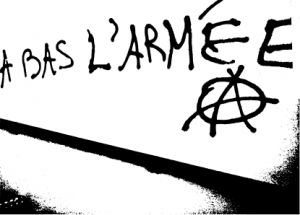 The 7th and 8th October, the municipality [of Besançon] had planned to make way for the military so it can show off its potency and seduce the public. The army, this school of submission, authority and crime takes root in every aspect of our everyday life: television and radio commercials, advertising campaigns ubiquitous in the urban space, recruitment banners on many buildings, propaganda articles in the press, regional as well as national, up to being present on paper bags for baguettes.

To ensure the promotion, the newspaper of the municipality (the ‘Besançon Votre Ville’ of October 2015) devoted a special dossier, in which the historical implantation of the army in Besançon is evoked (in buildings around the city, thousands of homes and employees, etc….), while detailing its colossal budget, its additional workforce to come, its material and human means to terrorize, oppress and massacre populations. That was enough to directly oppose all this shit that took place in front of the town hall.

During the week of 3 to 9 October, there was agitation against the army and all it bears. Posters were pasted, leaflets were distributed. The eve of their big party tags were sprayed in the ‘Battant’ district and at several places in the city: “The army, it stinks, it pollutes and it makes stupid”, “Down with the military”, “Neither nations nor borders – Down with the state and its uniform”, “The army loves you to death”, “Rather vandal than corporal”, “Rather indolent than sergeant”, “Fuck leaders,” “Let’s be wild, not guards”… The ‘Ruty’ barracks located in Bersot Street were also stained with red paint, just like the signboard at the entrance of the recruitment centre (CIRFA) located next door. The authorities were of course quick to erase everything and take everything away. On Thursday, 8th October, several interventions – mostly from students – have disrupted the smooth running of this militaristic event: with slogans against the army, by speaking through a megaphone in memory of Rémi Fraisse (opposing the dam in Testet, killed there almost a year ago in clashes with the military police), or by the suspension of two banners (“Long live the horror, apply now” & “Down with the army”) to the gates of the ‘Arsenal’ building of the faculty of languages, located close to their event. At the end of the demonstration organized against the austerity imposed by the State and the bosses (while there are areas where the state drastically bleeds budgets, the security forces instead receive huge means, the police and the army first and foremost), a small group again tried to disrupt it but came across several rows of cops who protected the soldiers on both ends of the square in front of the town hall. People passing by have seen what was to be a great celebration of the army required tight protection for it to take place without too much hassle…

Moreover, pamphlets were distributed where this PR operation of the army took place in the afternoon of Wednesday, 7 October. The anti-militarists who were disseminating leaflets also suffered a small pressure from the cops who held them a quarter of an hour, the time for an identity check. By order of the cops hierarchy, the leaflets were confiscated. 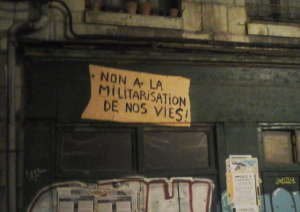 Each year, the states hold military parades and ceremonies to commemorate their past bloody wars while endorsing those in progress and paving the way for those to come. These regular ceremonies, serving the state to reaffirm its strength and the poison of national unity, are all opportunities open to us to demonstrate our refusal of their wars, whether conducted on the outside for the economic interests of States, against immigration or to maintain social peace within the borders…

On the side of Switzerland, there has recently been some blows to military infrastructure. Several border patrol vehicles were attacked during a demonstration against the army on 18 September 2015 in Basel. It was organized against a military exercise that was held in the city for several days, to train military forces to improve the control and surveillance of borders, but also to ward off any attempt to revolt and uprising against the state and capital. A few days later near Zurich, 9 army vehicles were burned on a military logistical base in Hinwil. Unfortunately fire-fighters managed to extract 14 vehicles from the flames of this magnificent sabotage. Another example, in Belgium this time: a car parked inside the military camp of Amay was burned. The vehicle, which belonged to a soldier, was completely destroyed. Since it was parked near buildings, the fire caused some damage to the framework of a building. In France too, many direct actions show that the army is not untouchable. In Valence (Drôme) 8 July 2015, soldiers on ‘Vigipirate’ patrol in the district of “Fontbarlettes” were attacked with stones. Their vehicle loses a window and in the aftermath the police station was the target of an attempted arson. Between 20 and 21 June 2015 in Toulouse, an army recruitment centre (CIRFA), located in the city centre, has all its windows destroyed. On the night of 26 to 27 October 2014 in Saint-Denis (93), the same fate for centre in the Gabriel Peri Street, the largest of the Ile-de-France region in terms of recruitments. The statement claiming the action said: “All powers are assassins. We will not make their wars, we will not leave them in peace. Social war for freedom (signed: belligerent deserters)”. On the night of 19 October in Munich (Germany), a civilian vehicle of the Bundeswehr is on fire, causing 30,000 euros of damage. In late October in Rennes, the recruitment centre of the army, located at Mabilais Street, is attacked in response to the killing by the military police of an opponent to the dam of Testet, Rémi Fraisse, one year ago: vehicles parked in the parking lot get their tires punctured and locks glued. In conclusion: if the “army is reaching out”, it is all the same within reach of everyone !