Besançon: Against this world of slaves and misery … Let’s plunge into the path of revolt!

In the face of our passivity and our resignation, the State is concocting ever more disgusting and humiliating projects. The dream of the rich and those who aspire to a world of wealth and exploitation is to see us slave away for their profits without flinching, we who are forced to accept any job to survive. Working hand in hand with the bosses, the State wants to make this “life” ever more unbearable for us.

The various laws that power seeks to make us swallow aim to alienate us even more and force us to accept the foundation of their rotten society based on exploitation and war of all against all: between those who work and those who don’t; the poor unemployed and those without papers fleeing wars and poverty, freeing themselves from ultra-secure borders and opposing the  State guard dogs. All these divisions between exploited, a mere reflection of this competitive prison world that power works for every day, are all barriers to break down.

Faced with the daily humiliation and misery of this system, some absorb piles of drugs, legal or illegal, commit suicide to escape the conditions of submission and oppression in which the dominant hold us. Although the vast majority comply with this filthy existence licking the ass of the owners or imbibing their values ​​(snitching, money, property, racism, etc …), others rebel individually or as a few, by attacking and destroying part of what constitutes the wealth of the exploiters.

Will we continue to bow down, follow like sheep the slightest whistle of the unions, first partners (collaborators!) of the State, always negotiating what sauce we will be served up? Marching every now and again behind reformist banners and slogans, along a route completely mapped out by the cops ???

There’s no way to stay in place, from home to the grind, tram stations to supermarkets and shopping malls, all in the middle of a barrack-style urbanism under the eyes of cops paid to control us and blight our existence. Let’s stop suffering the daily tram-tram. Let’s block everything.

If we go out into the streets it won’t be just to oppose a law that consolidates the chains that link the exploited and oppressed to the bosses and masters of this world. At a time when power is filling the entire territory with its ever more heavily armed uniforms, now is the time to take to the streets to refuse to be reduced to the state of slaves.

It’s no use brooding and bitching, either in our own areas or on social networks. It’s time to act, organize ourselves, always bearing in mind that to do the most harm to the enemy, it is necessary to remain unpredictable, spontaneous and uncontrollable.

Let’s renew the old revolutionary practices that we have abandoned for too long: the wildcat strike, the blockade, sabotage, and maybe more …

No compromise with those who make war on us!

[Poster flyposted in Besançon on the sidelines of the mobilization against the “labour law” of March 9, taken by Indy Nantes.]

Translated by Act for freedom now 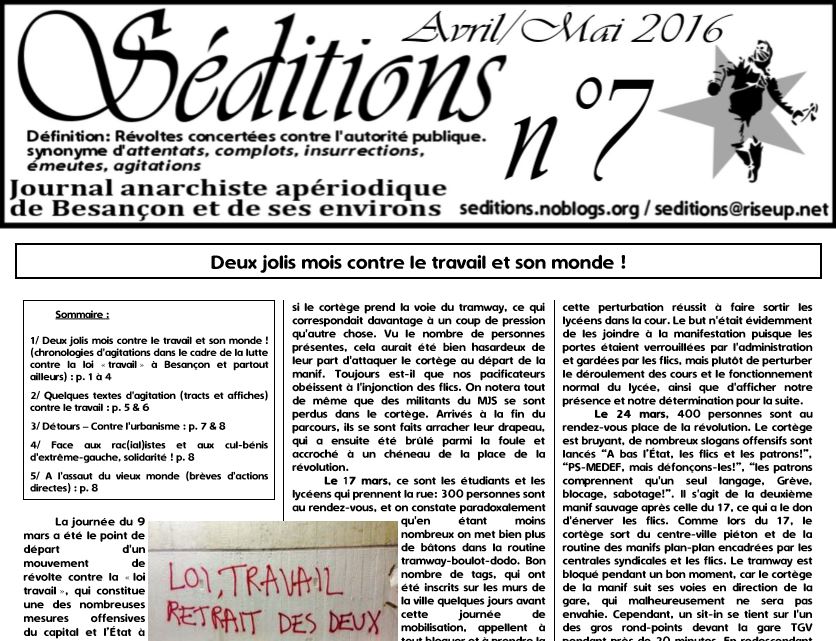